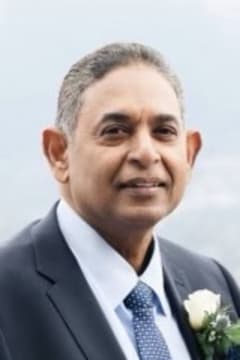 Ian was born in Port of Spain, Trinidad to Yussuf and Aileen. He first came to Canada in 1975, and settled there permanently in 1977 when married to Donna Ameerali, with whom he raised their eight children.

For over two decades, Ian was a much-loved, vibrant presence at the Royal Columbian Hospital, where his infectious good humour regularly raised the spirits of the patients, visitors and his co-workers alike. He worked hard to provide for his family while continuing to advance his own education, eventually becoming a respected high school educator who inspired hundreds of students over his many years teaching in Surrey and beyond.

Ian embodied curiosity: he could often be found exploring his community on foot or by car, or passionately and knowledgeably debating philosophical and political issues. Ian loved music, dancing and cars. Most importantly, Ian taught his children to work hard, play hard, love deeply and think for themselves, after his own example. He was a wonderful grandfather who enjoyed playing with his grandkids like he was a child himself. In his last years, Ian was committed to developing his very personal relationship with God.

Ian was predeceased by his son Michael and his brother Neil, but leaves many behind to mourn and remember him: his wife Arnelia; his children Peter, Kyron, Kerriann, Mark, Ricardo, Stephon, Nathalia and Maria, and their mother, Donna; his grandchildren Kassaday, Gabriel, Raphael, Michael, Benjamin, Giada, Ashleigh and Isabelle; and his siblings David, Lester, Nigel, Hayden and Sandra.

Virtual Event to honour Ian to take place Thursday, January 7 at 10:00 am PST