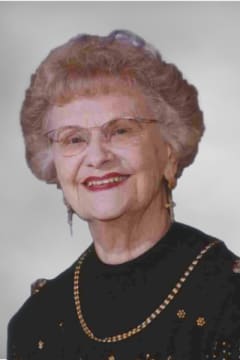 Theresa died peacefully in her sleep on March 4, 2021, at the age of 98. Born in Rockland, Ontario to Dora and Rene. The family moved to Maillardville when she was 12. She will be missed, but family is glad that her wish has been fulfilled to be reunited with her husband Albert. Family and her faith were paramount to Theresa. Even when she was limited in her speech, you could hear her attempting to pray the Hail Mary as she felt connected to Mother Mary. She and Albert were married in 1939 at Our Lady of Lourdes Parish. Later, as a founding member of Our Lady of Fatima Parish, she was extremely involved in parish activities, such as Les Dames de Sainte Anne, bingo canteen and the choir. Theresa sang solos for weddings and funerals for over 50 years. When her children attended Our Lady of Fatima Elementary she volunteered making costumes for pageants and was member of the PTO serving in positions from President/Secretary/Treasurer. Theresa was a longtime blood donor and volunteer for the Blood Donor Clinic sharing the stories of being awoken to give blood in the middle of the night, as the process was different in the past. She and Albert shared a love for music and passed this on to their children, with the piano in the front room and Albert right beside with his violin. Making made-to-order meals for her family brought her joy. Who could forget her baking? Theresa loved to sew, knit and crochet all whilst humming a tune. She had a flair for fashion only leaving the house fully done up and often wearing her signature pink. Many an afternoon was passed joyfully playing cards. She was the cribbage queen. Back in the day, her dailies included mass and visiting with her sister Joan and close girlfriends. You know who you are. Theresa was predeceased by her husband Albert, son Ronald, siblings Charlie, Joan, Gerry & Trudy, grandchildren Joseph and Stephanie and great-grand-daughter Renee. Survived by children; Fr. George OMI, Lorraine (Maurice) Hurtubise, Dianne (Bert) LeChasseur, Mark (Lola), and daughter-in-law Gail. Grandchildren: Michelle (Steve), Alan (Stepanka), Richard (Wendy), Melissa (Kevin), Heather (Fred), Myles (Jay), Jennifer (Craig), Joss (Nadine), Laurie (Dave), Bree (Kevin), Matthew (Danielle), Lance (Krista), Karen (Chris), Jillian (Paul), Sarrah (Brad), Adam (Kendra),and April. Great-grandchildren: Shayna, Isaac, Justin, Jairus, James, Kristian , Alyssa, Haley, Caleb, Julianna, Vanessa, Audrey, Mitchell, Elliot, Benjamin, Allan, Taryn, Jacob, Logan, Laura, Liam, Jaxon, Tyler, Sophia, Zoe, Chase, Jacob, Kamryn, Sydney, Matteo, Lynden, Sienna, and Paisley. Family wishes to acknowledge the caring staff at Belvedere Care Centre. Donations may be made in Theresa’s honour to assist marriage and family ministries in the archdiocese at https://support.rcav.org/donate-lmf/. Funeral mass to honour Theresa will be announced at a later date, when the health order lifts to allow for more attendees. www.ANORAlife.com